13 of the Most Haunted Places in America America is full of places—homes, hotels, roads, and even whole towns—that have a reputation for being mysterious, frightening or just downright creepy. Some of the most haunted places in America are associated with tragic events or curious legends from long ago. Others are known for strange and inexplicable occurrences.

Whether their ghosts involve celebrity sightings or victims of foul play, many of these scary sites have long attracted visitors eager to see whether they live up to the haunted hype. Whether you dare to investigate or simply want to read yourself into a fright, here are 13 spooky destinations that should be right up your dark, foreboding alley.

Does your destination have requirements or restrictions for travelers?
Some state, local, and territorial governments have requirements, such as requiring people to wear masks and requiring those who recently traveled to stay home for up to 14 days. Check state and local public health websites for information before you travel. 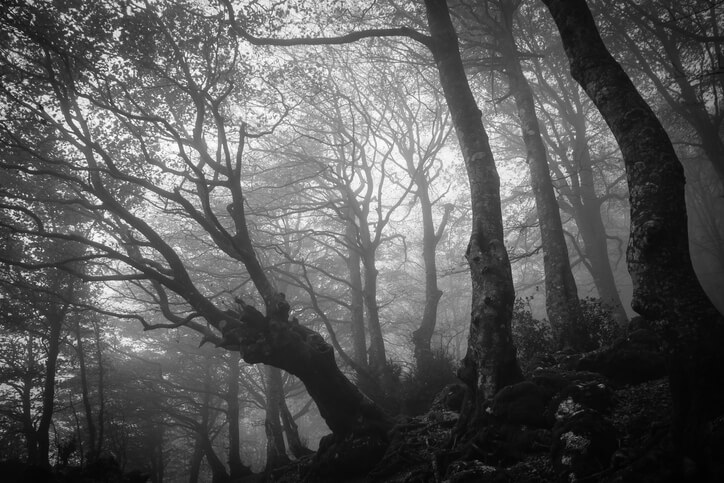 When a state park names two of its trails the “Ghost House Trail” and “Dark Hollow Trail,” hikers should be on high alert. Inside Tennessee’s 3,700 acre Big Ridge State Park, the Ghost House trail loops past the foundations of a home from the early 1800s, a grist mill and the Norton Cemetery. After the family living in the home had died, leaving the house vacant, neighbors continued to hear strange and eerie noises from within. This frightened the neighbors enough to move away. Ghosts of the family members have reportedly “photo-bombed” hikers’ pictures over the years, showing up as vague silhouettes.

Hikers have also spotted the apparition of a man dressed in red flannel and grey pants throughout the park. People have even heard very realistic sounds of a Model A car engine on the Dark Hollow Trail. Horseback riders and hikers with dogs say their animals have been spooked when passing through certain parts of the park. If you believe in an animal’s sixth sense, this may be the most telling sign of all.

Before you drive over this bridge, roll up the windows and lock the doors. For over 20 years, locals have witnessed the spirit of a woman who threw her three children off of the Banwell Bridge onto the railroad track below. The woman’s ghost now haunts those who dare to cross the bridge. Some drivers have reported hand prints on the car after reaching the other side. But wait, there’s more – some also report sightings of a decapitated railroad worker, and most recently, a werewolf-like creature. 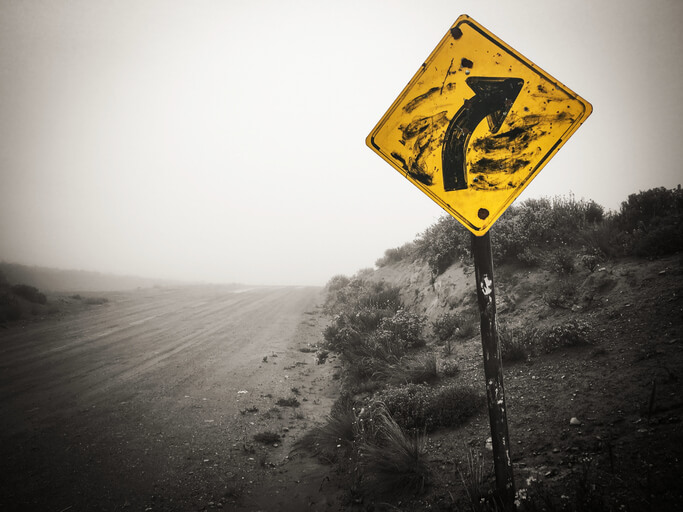 Any road with a section known as “Dead Man’s Curve” sounds dangerous enough for unwitting drivers. But there a few other reasons that Clinton Road in New Jersey has become a frightening place. Dubbed the “ghost boy of Clinton Road,” this spirit of a dead child apparently returns any coins that people attempt to throw into the lake beneath a bridge near the Dead Man’s Curve. Some of those who have stopped to peer into the water have reportedly managed to catch a glimpse of the ghost boy’s reflection. Reasons for his death vary. Was he hit by a car while running after a ball? Did he drown in the lake? Clinton Road has also been rumored to be a site for alien sightings and satanic cult rituals. It has attracted so much attention over the years that a movie was made about it.

Even during the day, this lonely little back road, locally known as Demon’s Road, gives off a truly eerie vibe. But if you head down this way after dark, don’t say you weren’t warned. Bowden Road, which leads to the notoriously creepy Martha Chapel Cemetery, is said to be one of the most haunted spots in Texas. Drivers have reportedly been chased by the apparition of a hooded figure and encountered ghosts of a young child or of hitchhikers. They’ve also seen strange red lights and found hand prints all over their cars after passing through the road. If you make it as far as the cemetery, watch out for shape-shifting demons, among other things.

A forest stroll is usually a peaceful activity – unless you’re in Freetown-Fall River State Forest. Dare yourself to meander through the 5,000 acre forest, which regularly makes the lists of “most haunted forests in the world.” It has certainly seen it all. The forest is said to have had everything from UFO encounters and Bigfoot sightings to rock-throwing trolls and satanic cult rituals. Fireballs to poltergeists have also been spotted. As the story goes, the area where the forest is located was cursed when settlers bought the land from the Wampanoag people. A piece of that land included the tribe’s sacred burial ground. 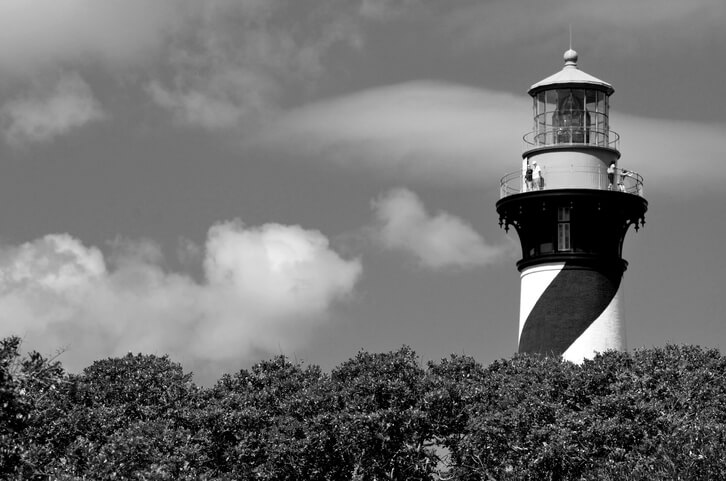 Apparently, any sort of house can be haunted—even a lighthouse. Lighthouse fans know it’s not unusual for these beacons of light to come with dark stories. One haunted lighthouse that’s easily accessible to visitors is located in St. Augustine, Florida. Several untimely deaths occurred here, including those of two different lighthouse keepers. Visitors have reported seeing them peering down from the top of the lighthouse or smelling their ghostly cigar smoke.

The most famous lighthouse legend centers on two young sisters playing in a construction cart. Legend says that it slipped down into the deep water before they could jump out. Some claim their spirits can be seen and heard laughing and playing on the property. Current lighthouse staff also say that the tower door they lock at night is often unlocked in the morning. Today, the striking black and white St. Augustine Lighthouse is a working lighthouse and a maritime museum.

But the lighthouse isn’t the only haunted place in town – how could it be when St. Augustine claims the title of our nation’s oldest city? Since it was founded in 1565 by Spanish explorers, this seaside community has borne witness to many tragedies. Therefore, its centuries-old cemeteries are also worth a visit.

In the tiny, rural town of Hawk Point (population 669), this small tunnel has been creeping out locals in a big way for decades. One of many stories tells of a man who fell from the now defunct railroad tracks above Satan’s Tunnel after being hit by a train. His spirit has haunted the dark, dank space ever since. Apparently, several people who attempted to enter this tunnel, where the “feeling of death” reportedly lingers in the air, were found dead inside or never seen again. If you attempt to take a peek inside this terrifying tunnel, some say you may be able to hear the sound of the whistle from the train that killed the doomed man.

Many thoroughfares are associated with local legends, but this Chicago-area road is known for so many uncanny events that it frequently turns up on lists of the scariest roads in America. Drivers on Archer Avenue say they’ve seen ghoulish monks, ghostly horses and something called the “gray baby.”

The stretch of Archer Avenue between St. James Catholic Church and Resurrection Cemetery is said to be the area where visitors are most likely to encounter its best-known resident, Resurrection Mary. The story has it that the spectral Mary is the spirit of a young girl who was killed while walking home from a dance, after arguing with her boyfriend. Modern-day Mary has been known to accept rides from people in the neighborhood, only to disappear at the gates of the cemetery. 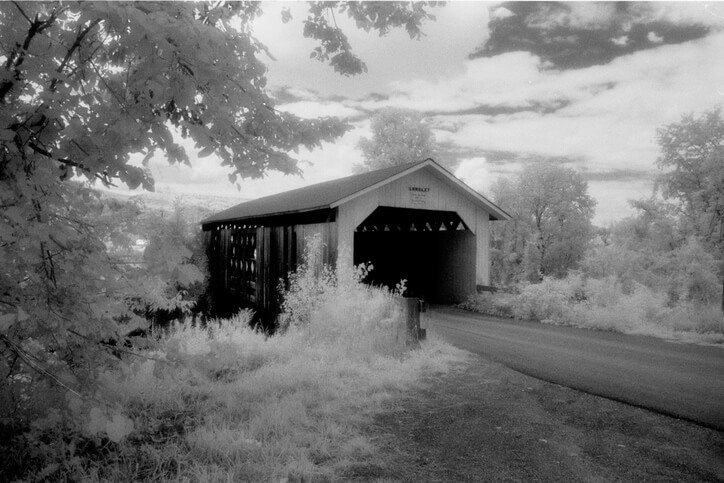 It can be frightening enough to drive across an old and narrow covered bridge, but the one that carries Covered Bridge Road across Gold Brook in Stowe, Vermont, has an added danger: a ghost named Emily. This phantom woman is said to have either committed suicide or died in an accident at this bridge after being jilted at the altar in the 1920s. Some say Emily can be heard screaming here, and blame her for scratching nearby cars.

If you visit this place, also known as Emily’s Bridge, please be respectful. The scariest thing about this residential area might not be a spirit, but neighbors. They may be tired of rowdy ghost hunters looking for one of the most haunted places in America!

This road in Centralia, Pennsylvania, isn’t visited by apparitions or possessed by demons—it’s eerie for a different reason. This mile-long stretch of Route 61 was abandoned in the early 1990s when the pavement buckled beyond repair. The damage was caused by the anthracite coal fire. The fire had been burning in the underground coal mines since at least 1962. A new road was built around it. Afterward, people reported that the asphalt felt spongy, and steam could be seen shooting from the cracks.

Today, visitors come to see what is now known as the Graffiti Highway. Artists have spray-painted colorful words and pictures, eventually covering the road and giving it its name. Residents of Centralia don’t mind, simply because there are so very few; the slow-burning town was evacuated for safety reasons and its buildings were torn down.

The ramshackle ghost town of Kennecott is a mining town abruptly abandoned in 1938 when the copper mines shut down. It’s now a part of Wrangell-St. Elias National Park, the largest national park in the country. To get there, visitors drive 60 miles through the wilderness, down the gravel McCarthy Road, along the old Copper River and Northwestern Railway tracks.

Paranormal activity has been reported along the abandoned tracks for decades. That’s not all that makes it one of the most haunted places in America. Some claim to have seen old tombstones along the route. The tombstones then vanish by the time the visitors make their return trip. Others have reported hearing disembodied voices and phantom children laughing. There’s also a story that a 1990s construction project here was halted after workers were scared away by spooky sounds and inexplicable events. 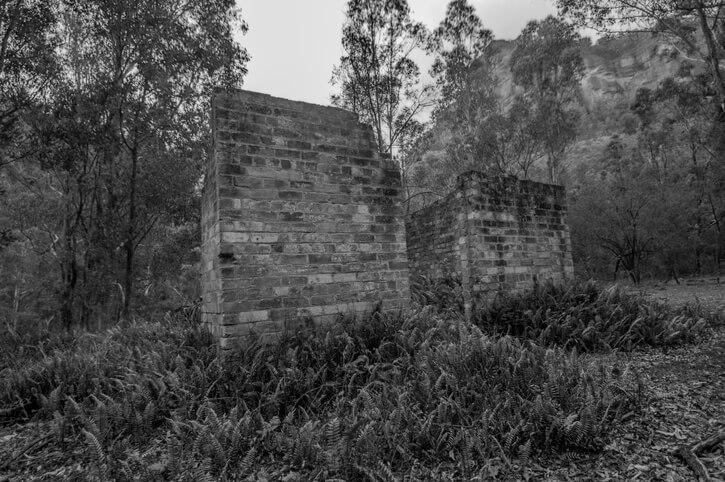 There’s not just one hair-raising route through southern New Jersey’s Pinelands. Many roads in this sparsely populated area have been called weird, creepy or flat-out haunted. The Pine Barrens is the traditional home of the Jersey Devil. The ugly winged creature is said to have been born to a human couple in the 1700s. If the possibility of a Devil sighting isn’t enough for you, there’s more. The area’s abandoned mills and ghost towns add to the sense that there’s something unusual about this place.

If you don’t want to drive through a million acres of Pinelands without a plan, the 130-mile Pine Barrens Byway takes drivers through five counties. It goes past rivers, forests, wildlife preserves and historic towns. Don’t worry if you hear flapping wings and eerie cries, or spot strange footprints. The Jersey Devil is believed to be harmless.

This eight-mile dirt strip enclosed by a canopy of trees is located outside of Saratoga in Hardin County, Texas. Unlike many haunted roads that are known for a variety of apparitions, the evocatively-named Ghost Road Scenic Drive is associated with a singular legend: the Saratoga Ghost Light, also known as the Big Thicket Light. Drivers on this road say they’ve spotted mysterious lights that randomly turn on and off throughout the night. There are all sorts of theories about what causes the light show, from scientific to supernatural. One story describes the light as the ghost of a mourning husband searching for his bride. She had been mysteriously murdered while the couple was honeymooning at the Bragg Hotel, which used to exist at the end of the road.

No matter where you live, there’s sure to be a spooky place or two nearby. Just be careful if you go exploring, especially if you find yourself driving on back roads or through abandoned places. If you’re heading out on a creepy road trip to one of the most haunted places in America, now is a good time to make sure that your vehicle is in good shape and that you’re happy with your car insurance. When you’re setting out to encounter the supernatural, the last thing you want to worry about is your getaway vehicle.